Need a gaming PC for LAN parties? Or, just a system that has a small footprint? In this guide, you’ll find three different mini gaming PC builds and prebuilt systems that are powerful enough to work as mid-range (and beyond) gaming computers.

In the past, PC building enthusiasts have typically opted for larger computer cases so that they could have as much room as possible for building a high-end gaming computer. Nowadays, though, more and more gamers are choosing smaller form-factor cases and mini-ITX motherboards so that they can build mini gaming PCs that have reduced footprints.

The rise in small form factor PCs has coincided with the increasing popularity of mini-ITX cases and the continual advancement of computer hardware (namely, GPUs and CPUs). In fact, it’s never been easier than it is now to build a powerful mini gaming computer.

So, if you are one of the growing number of users who are looking to go smaller with their computer, in this guide we’ve listed three different options you have for getting a small form-factor mini gaming PC. We’ve listed an affordable mini-ITX gaming PC build, a mid-range mini PC build, and a high-end mini-ITX gaming PC build. And, if you’re not up for building your own computer, we’ve also linked to similarly-priced pre-built mini gaming PC as well.

NOTE: If you want an even more mobile system, you might want to consider getting a gaming laptop instead. If so, check out our guide on the Best Gaming Laptops Under $1,000 for some reasonably-priced laptop options.

If you just want a quick overview of the three mini-ITX gaming PC builds and pre-built systems we’ve recommended in this guide, the table below will provide you with some basic details as well as provide you links to both the full part list of components you’ll need in order to build the system (on Amazon) as well as the pre-built alternative to the build we’ve listed.

*While we do try and update our builds on a regular basis, the reality is that component prices change on a daily basis and components go out-of-stock all the time. If you see that the price is significantly different than the one we have listed, or there is a component that is no longer available on Amazon, you can either search for a similar replacement or ask us for advice on an alternative by posting in the comment section below this article.

This $500 gaming PC build comes in a compact mini-ITX cube-style case, the Thermaltake Core V1. The Core V1 is one of the most affordable mini-ITX form-factor cases currently on the market. However, with the flood of “mini” graphics cards that have hit the market, the Core V1 is actually capable of holding a high-end system inside of it.

For this build, though, we focused on keeping the cost down and so we opted for an affordable Intel Core i3-9100f & RX 570 4GB combination.

The quad-core Intel Core i3-9100f and RX 570 4GB graphics card are good enough to allow you to play pretty much any game on a budget-friendly 1080P monitor. And, for non-demanding games (like Rocket League, Fortnite, Dota 2, League of Legends, etc.), this build is powerful enough to run them on higher settings.

We chose the Intel Core processor over a budget AMD processor (like the Ryzen 3 3200g or Ryzen 5 2600) mostly because the i3-9100f/RX 570 combo would outperform the 3200g and the Ryzen 5 2600 can’t be fit in a sub-$500 budget unless you buy some used parts as well. We also decided to go with an RX 570 4GB graphics card over a GTX 1650 4GB graphics card because they come in a bit cheaper despite offering similar performance in most benchmarks.

This build also comes with 8GB of DDR4 memory, a 550W power supply, and a 240GB SSD. You could replace the SSD with a 1TB hard drive for the same price if you need more storage, but since this is a small form-factor build, we figured the smaller and faster SSD might help save a little space.

In any case, for just $500 this mini gaming PC is capable of serving as a solid option for non-demanding eSports games and it will run anything you throw at it on a 1080P monitor on at least low-to-medium settings.

**Price includes the components that make up the tower only. Windows 10 is included in the list, but will cost extra—and you will definitely need an operating system one way or another.

For just a couple hundred more than the build listed above, you can land this mid-range 1080P-killing small form-factor PC. This system sports an upgraded AMD Ryzen 5 2600 processor and an RX 590 8GB graphics card.

The jump in graphics card that this build offers will allow you to max out any game on a 1080P monitor. You could also opt for a GTX 1660 6GB graphics card instead of the RX 590 8GB in this system, but the RX 590 is still quite a bit cheaper and will allow you to pair it with an affordable 144Hz 1080P FreeSync monitor for the ultimate experience in competitive games where using a higher refresh rate monitor can give you an advantage.

This $700 gaming PC also comes in a sharp-looking Phanteks Enthoo Evolv ITX case. It is a mini-ITX case that has a tempered glass side panel that will allow you to show off your build.

You could also opt for an Intel Core i5-9400f and the same mini-ITX motherboard listed in the $500 build. However, the i5-9400f is a little more expensive than the Ryzen 5 2600, won’t allow for overclocking, and doesn’t come with as nice of a stock cooler. And, while the i5-9400f has better single core performance and, thus, will provide a small bump in performance in certain games, the performance difference probably isn’t big enough between the two to justify the extra cost. And, the Ryzen 5 2600 also comes with more cores and threads, giving it an advantage in multi-core applications and/or in multi-tasking.

Overall, this is a really solid mini gaming PC build for the price.

**Price includes the components that make up the tower only. Windows 10 is included in the list, but will cost extra—and you will definitely need an operating system one way or another. 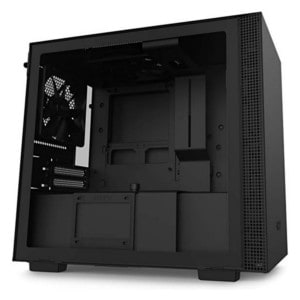 If you’ve got a larger budget and you’re looking for a high-end mini-ITX gaming PC, then the system below might be the option for you. It has an AMD Ryzen 5 2600 processor and an RTX 2070 SUPER 8GB graphics card.

The RTX 2070 SUPER graphics card means that this build can max out any game on a 1080P monitor easily, can run most games on higher settings on a 1440P monitor, and will serve well for 4K gaming, too. If you’re a competitive gamer, pairing this system with an affordable G-Sync monitor with a higher refresh rate will help you get a really smooth in-game experience, too.

We opted for an AMD Ryzen 5 2600 here over an Intel Core i5-9400f because the 2600 will allow you to overclock and it comes in at a lower price point. And, even though mini-ITX AM4 motherboards are a bit more expensive than Intel’s mini ITX motherboards, having the option to overclock as well as the additional cores will come in handy in the future and/or if you’re a streamer.

The other good thing about going with an AMD Ryzen 5 2600 is that you get a stock cooler that not only performs well, but also looks nice, too. So, if aesthetics are a concern for you, then that just gives you more incentive to go the AMD route. Of course, if you want even better cooling (for extreme overclocks) you could add a third-party CPU cooler to this build—but that will drive the cost a little more.

For the case, we chose NZXT’s H210 mini-ITX chassis. It’s a really nice-looking small form-factor case that has a tempered glass side panel, a PSU shroud, and plenty of room to hold this system.

Ultimately, if you’re looking for a really powerful mini-ITX gaming PC, this build will meet your needs now and for a long time into the future.

NOTE: As an alternative mobile gaming computer option, check out our guide on the Best RTX 2060 Laptops for powerful gaming laptop options at a similar price range.

**The ‘Grand Total’ price includes the parts that make up the computer only. We’ve included Windows 10 in the list, but it does cost extra and you will need an operating system in order to boot your system up.

Have A Different Budget? Check Out These Guides for More Builds

If these three builds aren’t what you’re looking for, or if you just want to explore other options (including non-mini-ITX systems), then you can check out our other build guides for more options. The following two guides will give you wider a range of PC builds at various price-points: