In this guide, we've rated and reviewed seven of the best cheap 4K monitors. All of these 4K monitors come in under $300, making them perfect UHD options for budget-oriented users. While the cost of the hardware that is necessary to play games on a 4K monitor at maximum settings with higher framerates is still incredibly high, 4K monitors themselves have actually become quite … END_OF_DOCUMENT_TOKEN_TO_BE_REPLACED 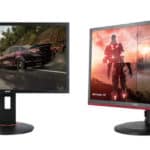 Thanks to games like PUBG, League of Legends, Dota 2, Fortnite, and Overwatch (to name a few), the popularity of competitive online gaming is at an all-time high. Not to mention, the rise of eSports gaming---and the potential for 'going pro'---has driven gamers to seek out every advantage possible to stand out from the competition. One such advantage that many professional … END_OF_DOCUMENT_TOKEN_TO_BE_REPLACED 4K 144Hz monitors have finally released (kind of). In this post, we'll discuss why they probably aren't worth it for most gamers (yet). If you're someone who plays story-driven games with beautiful graphics and you aren't much of a competitive gamer, then for you a 4K monitor was a better option than a 1440P 144Hz monitor. On the flip side, if you're a competitive gamer who … END_OF_DOCUMENT_TOKEN_TO_BE_REPLACED 4K monitors burst onto the scene a few years back. When they first started showing up in stores and on online retailer websites, they were going for exorbitant prices. In the years since their release, though, they have come down in price considerably. Yet, despite lower prices on 4K monitors, people still really aren't using them for gaming that much. So, in this article, … END_OF_DOCUMENT_TOKEN_TO_BE_REPLACED